Home
Products
About Us
Factory Tour
Quality Control
Contact Us

PP /  PE container bulk Liner bag for railway open wagon was tested and is widely used by shippers in the unpacked transportation of bulk products such as lime, sodium silicate (silicate block), concentrate of the mineral halite (salt). In accordance with the Rules of transport of dangerous cargoes by railway, transport of ammonium nitrate is allowed packed in covered wagons. But because of the impossibility of mass transportation of cargo in covered wagons, it is necessary to transport it in the open wagons with the use of additional accident preventatives -liners for open wagons.

Our experts have developed a basic design for the cover - "Liner for open railway van”. The mentioned types of covers can be disposable or reusable, with the lower hatches for unloading the product or without them.

Currently designed the layout of placing and fixing this package for transporting in 4-axle open railway van:

Way of transportation of dry bulk cargoes; usage of construction:

The product is loaded into the mentioned liner for open railway van and then the surface is being leveled. Then end items are placed on the cargo and bind to each other through reciprocal tapes, which are sewn to the edges. Side parts are placed with an overlap on the surface of the cargo and their edges are connected by successive connection of the free ends of tapes, which are sewn on the edge of the liner, to reciprocal loops, sewn to the outer side of the opposite side element, and the free tape of this side element with reciprocal loops, sewn to the outer side of the earlier laid side element. Binding is made in stretch, thus eliminating the possibility of appearance of windage of liner for the open van.

Unloading of product is perfomed through the lower folding valves of liner for the open van or in the case of their absence by tearing of woven fabric. Using this method allows to reduce significantly the time for preparing van for loading and does not require cleaning the van after unloading of product."It is established, that transporting bulk fertilizer in the open van, the rate of corrosion of the walls can be up to 0.1 mm per year.""
Upon request, liner design may vary.

The use of open railway vans with liners provides the necessary advantage over specialized train "hopper wagon", because there is a great lack of them in season of transporting.

Liner for the open van is made of polypropylene and is fully suitable for the transport of foodstuffs.

Using of liners for the open railway vans against Big Soft Containers and Big Bags makes cheaper the transportation of bulk cargoes, as eliminates the stage of product packaging, its reloading and unloading from the open wagons.


Liner for open railway van corresponds to a scheme of placing and fastening of covers of dry bulk cargo in a 4-axle open vans. 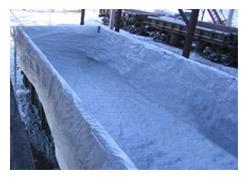